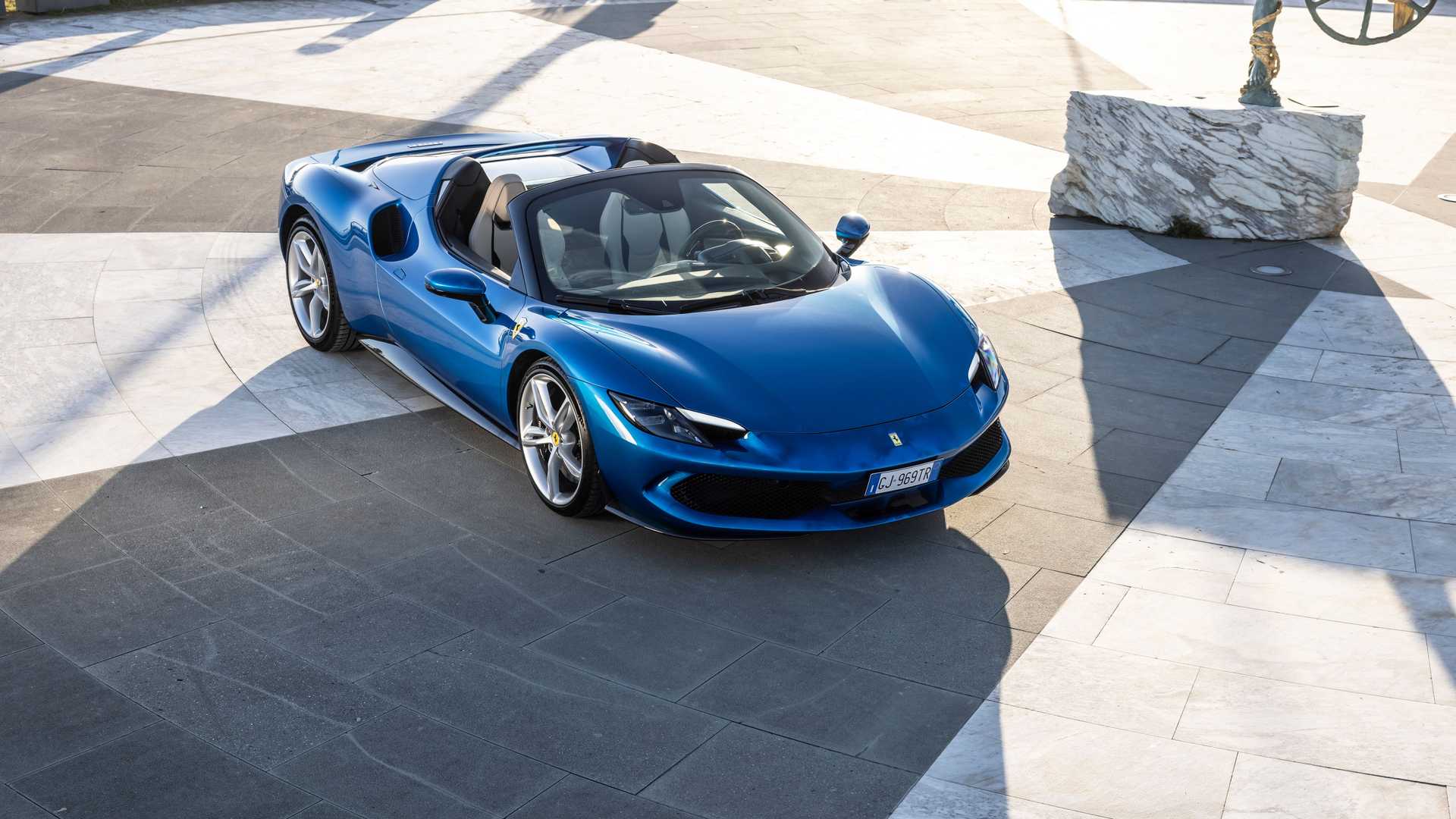 The 296 GTS makes a glorious noise, inspires national pride, and shows the soul of Ferrari persevering in the electrified age.

It’s true what they say about driving a Ferrari in Italy: Everybody, and I mean everybody, stops and stares. From the old dudes who have seen them coming out of Maranello since the 50’s to young schoolgirls who couldn’t care less about cars, and everyone in between. They’re not looking because you look cool – they’re admiring the rolling point of national pride you’re driving, an impulse away from full-on saluting.

From my position in the cockpit, I have to remember what the 296 GTS admirers are seeing: The front, wide-mouthed like that of the LaFerrari with the active aero in the rear an evolution of that found in that hypercar; between, aggressive bulging bodywork channels air into large intakes ahead of the rear wheels that perfectly recall the 250 Le Mans from back in 1963. This particular 296 GTS is finished in Blu Corsa, a sparkling metallic blue that perfectly matches the almost-white (Ferrari calls it Sabbia) interior. I’m just outside of Imola, but the combo makes it easy to feel a bit like a modern-day Don Johnson in Miami Beach.

With the retractable hard top down (and really, on any half-decent day it would be gauche to ride with it up) the eye fills in the lines of the 296 GTS silhouette as nearly a perfectly obtuse triangle. It’s almost awkward but, perhaps through sheer force of stubborn will, it kind of works. But that’s not what you see from inside, and that’s not what they see from outside – not really. They only see “Ferrari” if they see anything at all, because their brains are too busy hearing the sound of the thing – that which truly makes a Ferrari a “Ferrari.”

The twin-turbocharged 3.0-liter V6 is a peach, pumping out 654 horsepower even before electric help. Its uncommon 120-degree design lowers the center of gravity, allowing the turbochargers to nestle right into the valley atop, fed hot air by a beautiful set of tubular Inconel headers. 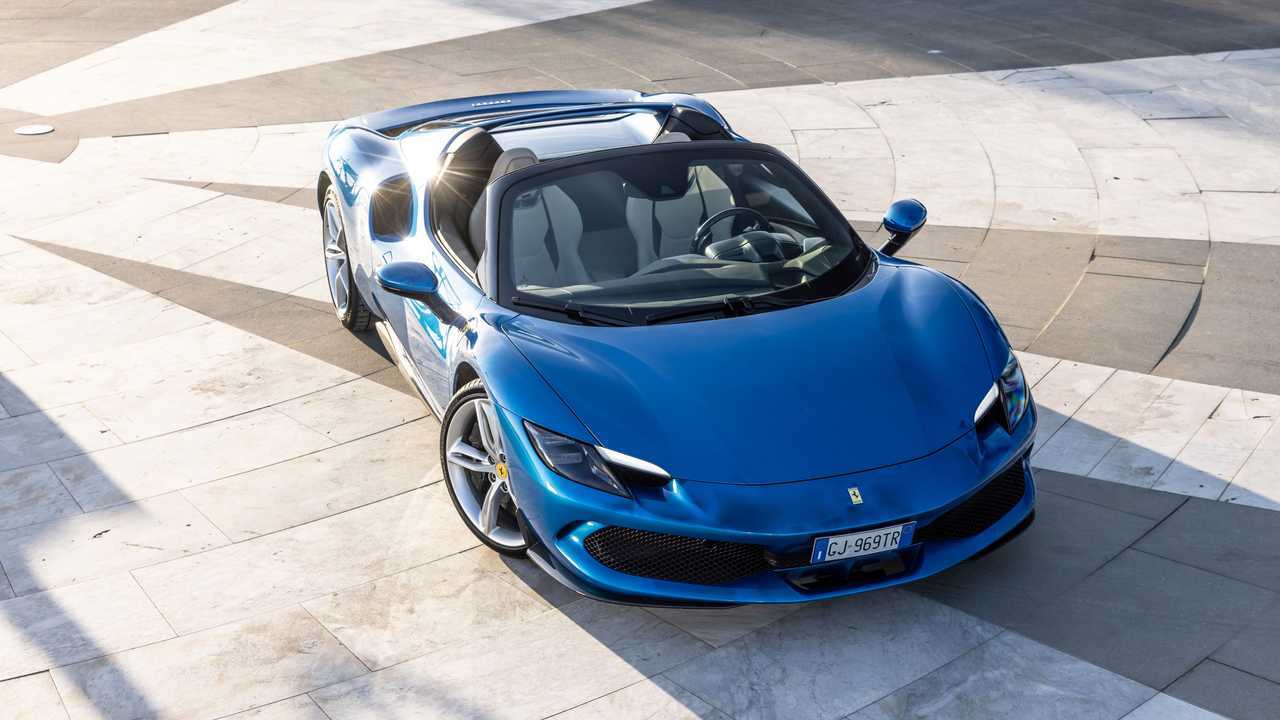 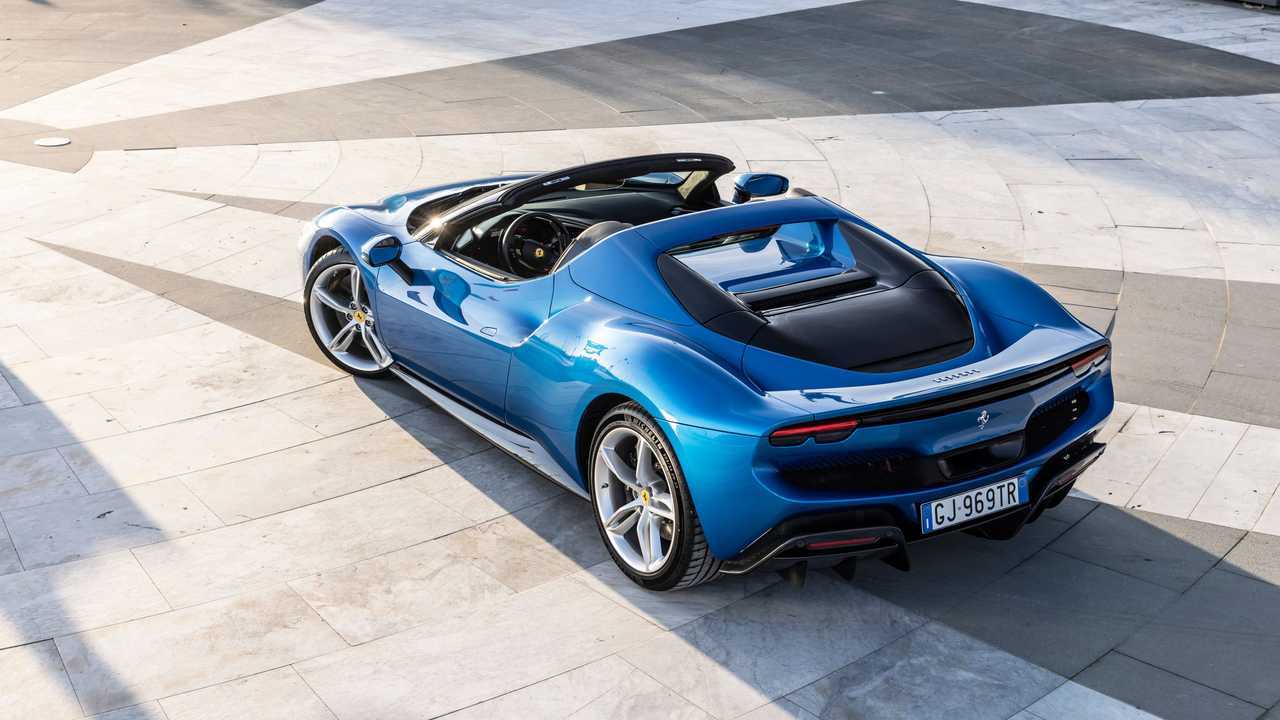 Being a Ferrari, the engine is loud in all the right ways on startup – if you hadn’t already drawn a crowd, you will when you push the button on the steering wheel. It’s arguably even better from inside, where all the right noises make it to your ears, including the whooshing of boost, the blowing off of excess pressure, and the odd wastegate “pop” like uncorking a bottle of champagne that only makes the experience all the more vital.

It's not just about the engine, of course. Sandwiched between the V6 and eigh-speed dual-clutch transmission is an electric motor that adds up to 165 horsepower. Combined, the 296 makes 818 horsepower and 546 pound-feet of torque, which should be enough to easily overwhelm the rear tires in the most inconvenient moments. 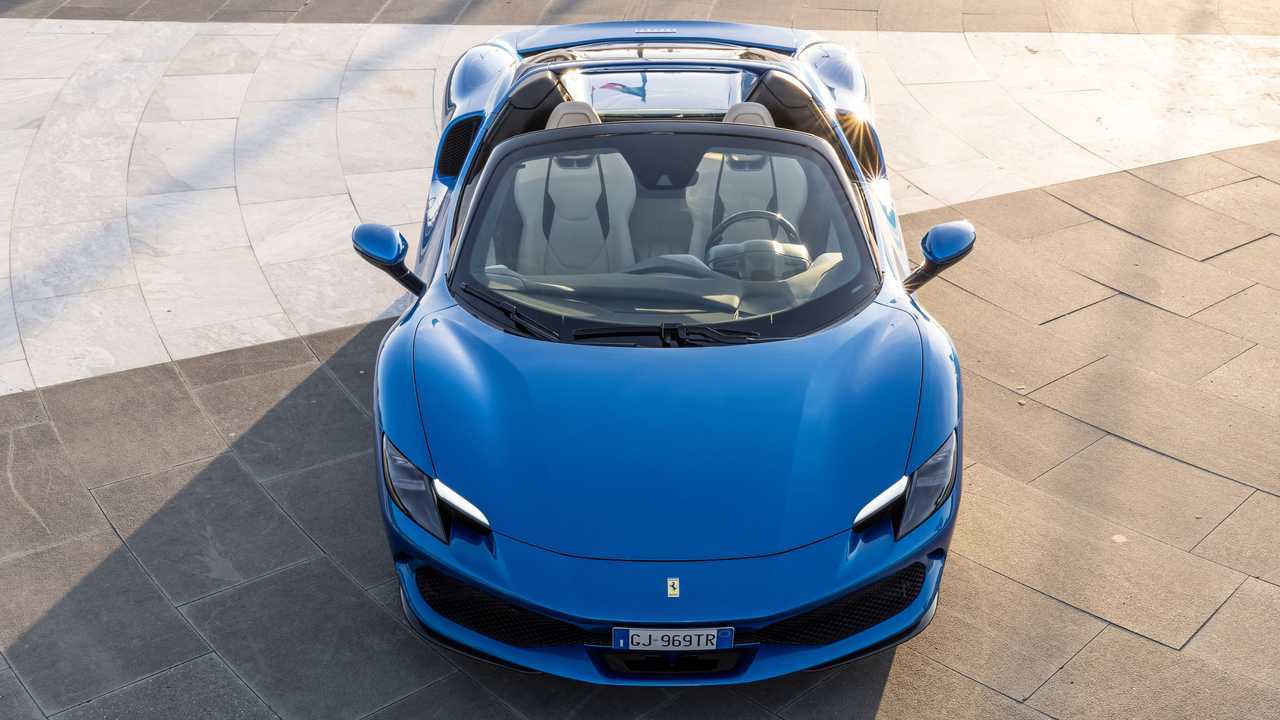 Except it’s not. As good as the 296 is, its biggest achievement might be its approachability. It’s one thing to have gobs and gobs of power (it does), but quite another for it to feel progressive and usable. No matter how deep a plunge you take with your right foot, there is a gradation in the swell of power. Never is there the “uh-oh, now I’ve really done it” feeling associated with heavily turbocharged supercars of the past. And that’s not to mention the amount of cooperation happening behind the scenes between electric motor, internal combustion engine, and turbochargers. The melding of it all is utterly imperceptible behind the wheel.

On the other hand, the 296 is in fact a plug-in hybrid, so it’s easy to zip around town using only the electric motor, altogether bypassing the delicious ruckus that the 120-degree V6 makes. The system will allow about 15.5 miles of electric-only driving and it supports speeds of about 84 miles per hour. And if you’re a rich kid looking to sneak out with dad’s (mom’s?) Ferrari, you’ll be tickled pink. 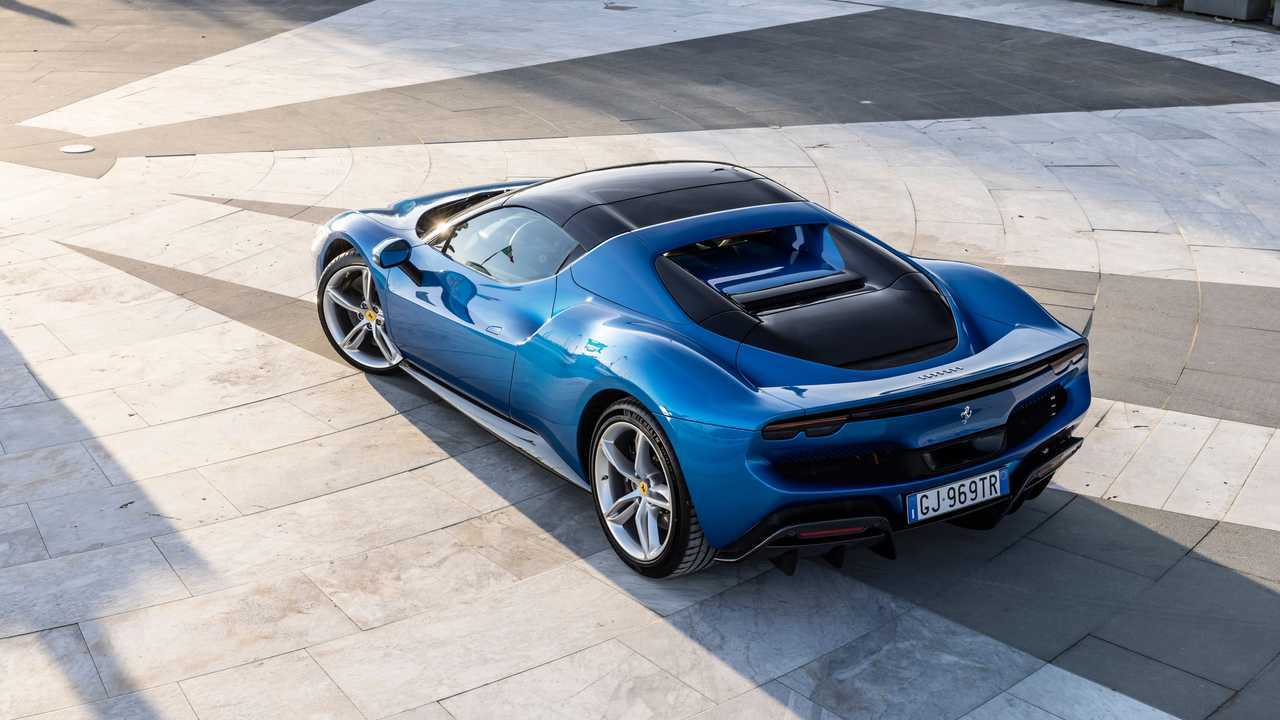 You won’t be surprised to read that the steering is scalpel precise, with no dead zone on center. In place of the sort of feedback through the wheel that you might have had in an F355, there’s really quick response – sharp enough that you sometimes find yourself dialing in too much wheel. When you do, though, the chassis and all four wheels respond as one; the 296 is tight as a drum, folding roof or not. It does weigh roughly 3,700 pounds – these days that’s not necessarily a sin for a sports car, and when you factor in the fact that this is a hybrid that produces 800-plus horsepower, it’s a downright feat.

With that kind of power-to-weight ratio, it nearly goes without saying that you don’t feel the 296’s mass under acceleration, but the same is true under braking or when hustling through corners. From the outside, it looks like a thing that can barely spare an inch or two of suspension travel, but it somehow effortlessly soaks up anything the bumpy B-roads outside of Imola can bring. Even mid-corner, on the gas, and with a lot of speed, sudden roots and ridges in the pavement do little to upset the 296; the rare bump that might cause a slight hop would cause lesser cars to completely lose composure – maybe irrecoverably so. 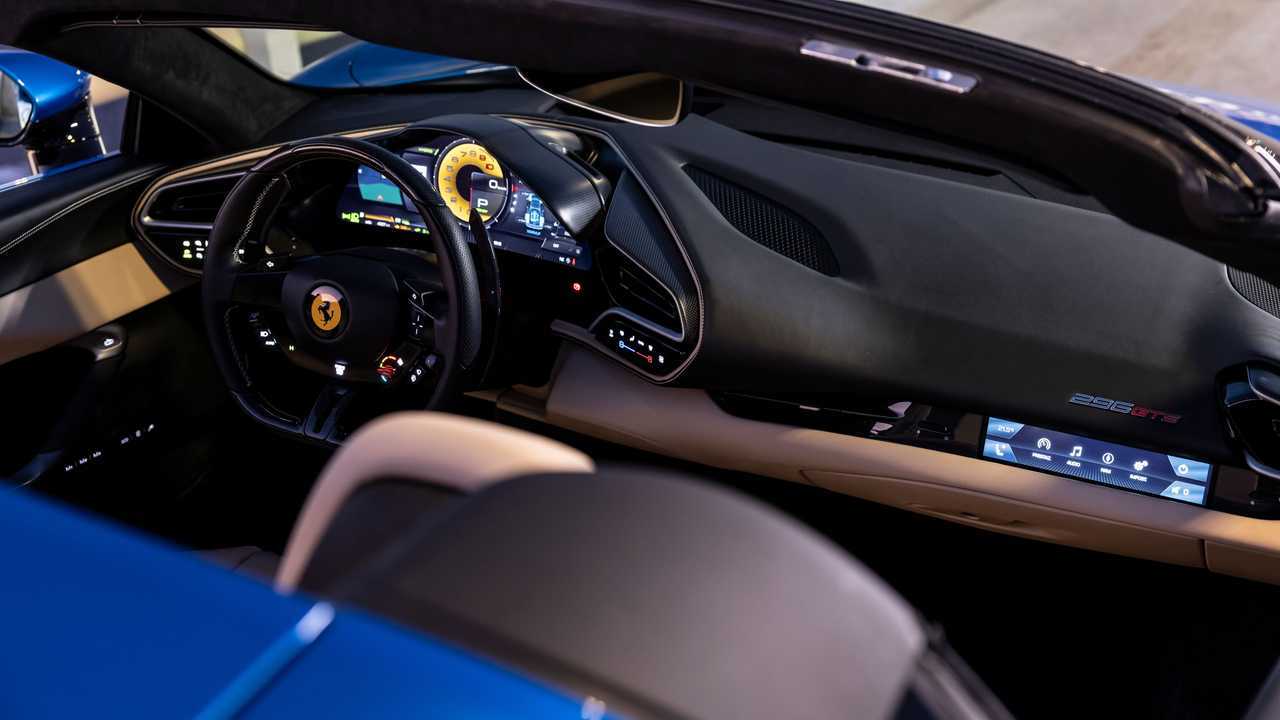 What does dampen the driving experience, though, are capacitive controls for practically everything in the cockpit, right down to the “START” logo that appears on the bottom of the steering wheel. As far as anything that involves scrolling or swiping, it’s not just that these are capacitive controls – it’s that they’re particularly bad ones.

To move the cursor through apps, for example, takes repeated swipes on the thumb pad, which means repeated eyes-down moments at the screen to see how far each swipe didn’t actually get you. And there’s no feedback, so you don’t know when you’ve actually done the thing you’d set out to do. I’d probably take the repeated swiping over the “sticky buttons” issue that plagues the 90’s Ferraris that get my heart, but please, it’s time to move away from this tech. 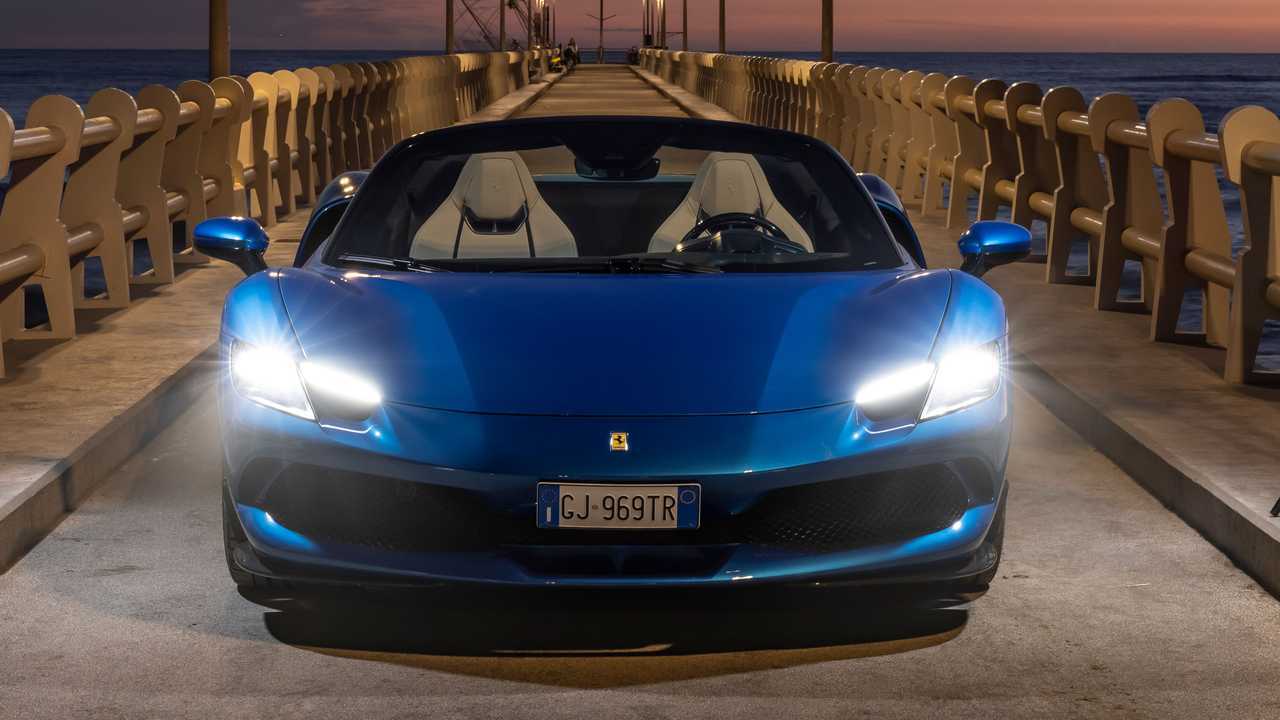 Some of the controls that aren’t capacitive are a bit of a head-scratcher, too – needlessly different. If you need to go for the blinker while the wheel is turned, you’ll have to look down again – or at least use some processor power to ascertain where the actuator you want is at that moment, as they’re mounted on each side of the steering wheel. Same goes for the high beams and the wipers, which are actuated using identical paddles on the back of the steering wheel; super convenient if you’re going straight. 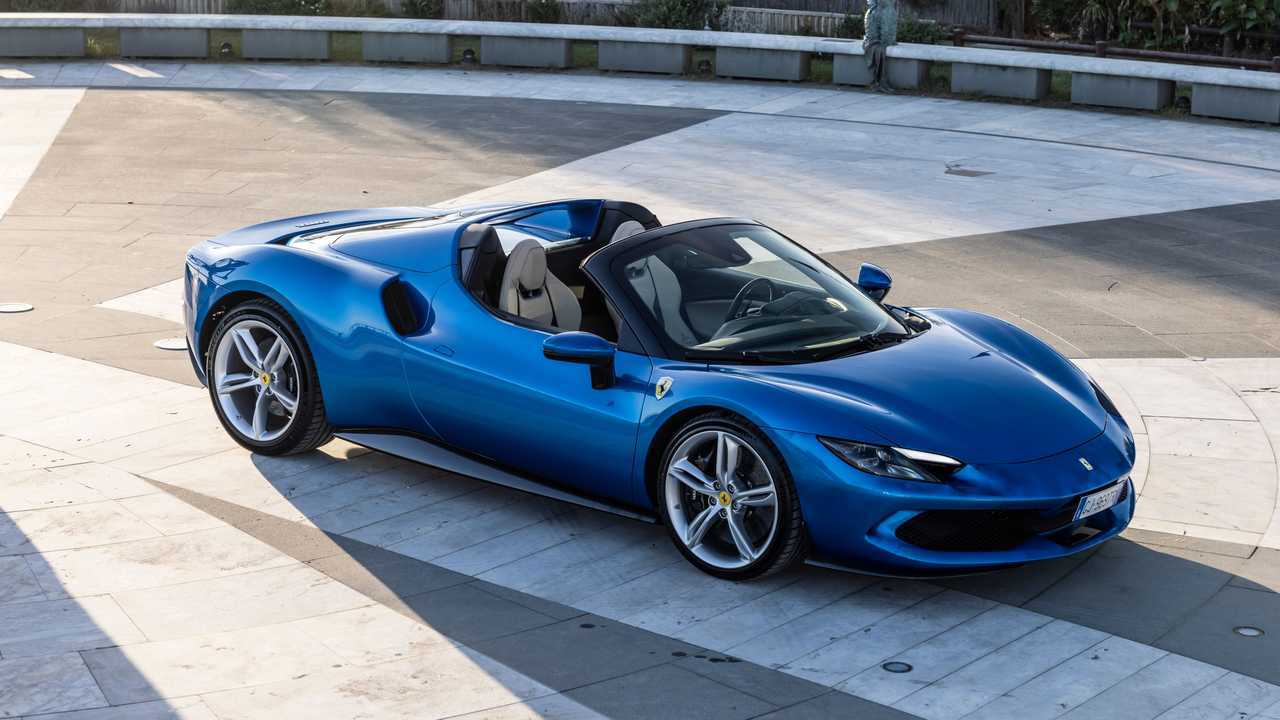 Still, those are small gripes in a moon shot of all the engineering that actually matters coming together and working beautifully. Is the 296 GTS better than any other latest-and-greatest supercar among a churn of latest-and-greatest supercars? Maybe. But what makes the 296 GTS great – what makes any great Ferrari truly great – is what it inspires in the onlookers you pass in Ferrari’s backyard. It's a near guarantee that they’ve never seen it before, and yet they know. They know what this is, and what it means to them, or their sibling or uncle or grandfather who owned or worked on or helped build what came before.

It’s hard to explain but behind this wheel you couldn’t be more Italian the same way you couldn’t be more American if you drove down grandpa’s Main Street in an F-150 full of college football stars waving flags and tossing McNuggets to adoring Boy Scouts below. Yes, Ferrari can still build a beast of an engine in the era of EVs, hybrids, and turbocharging; more impressive, Ferrari can still build Ferraris. 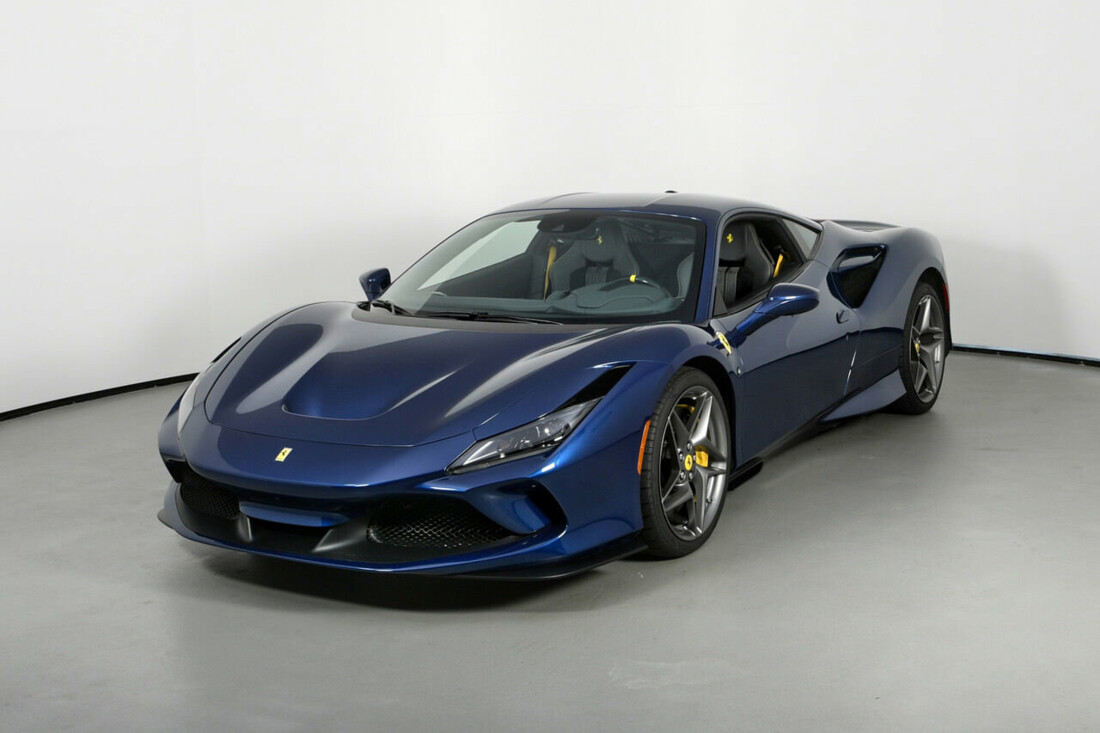 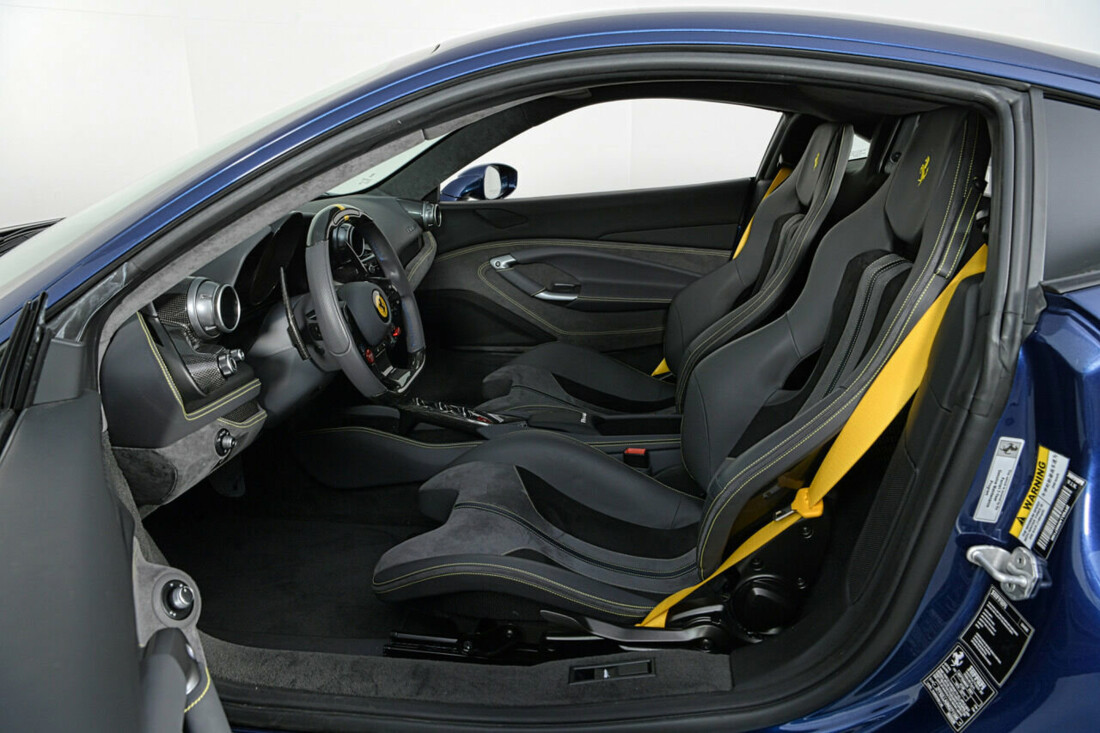 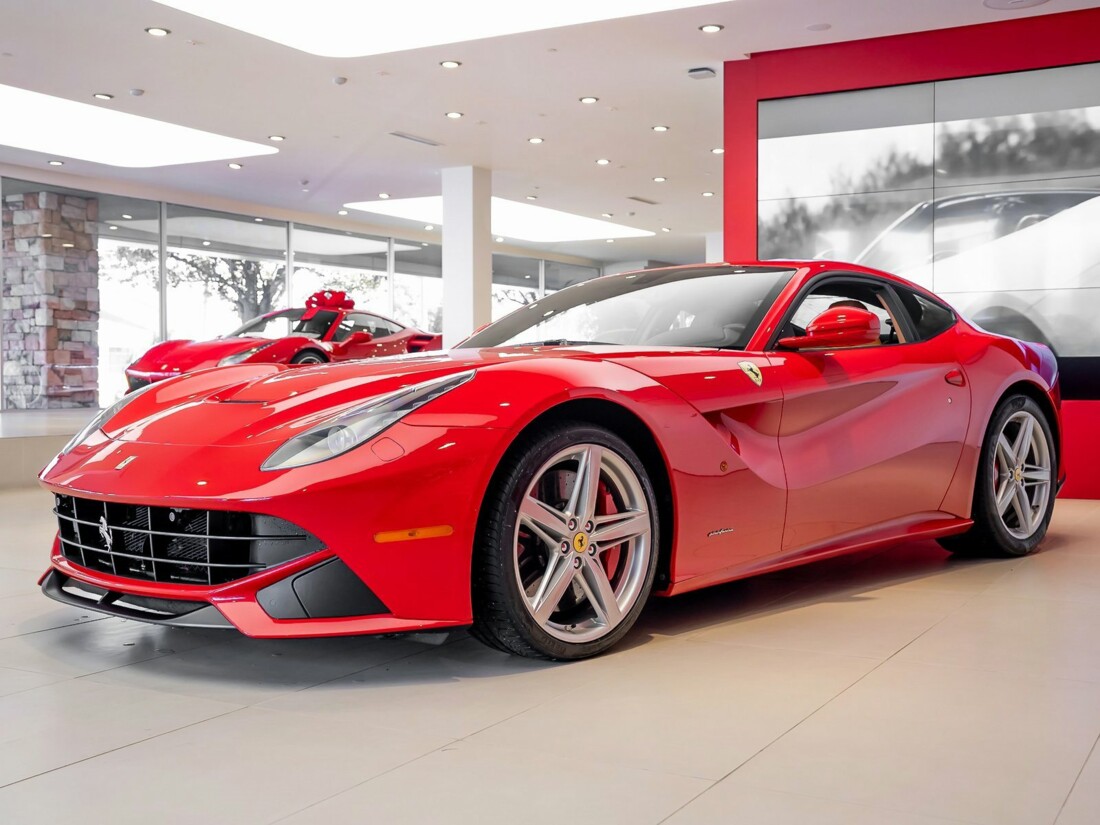 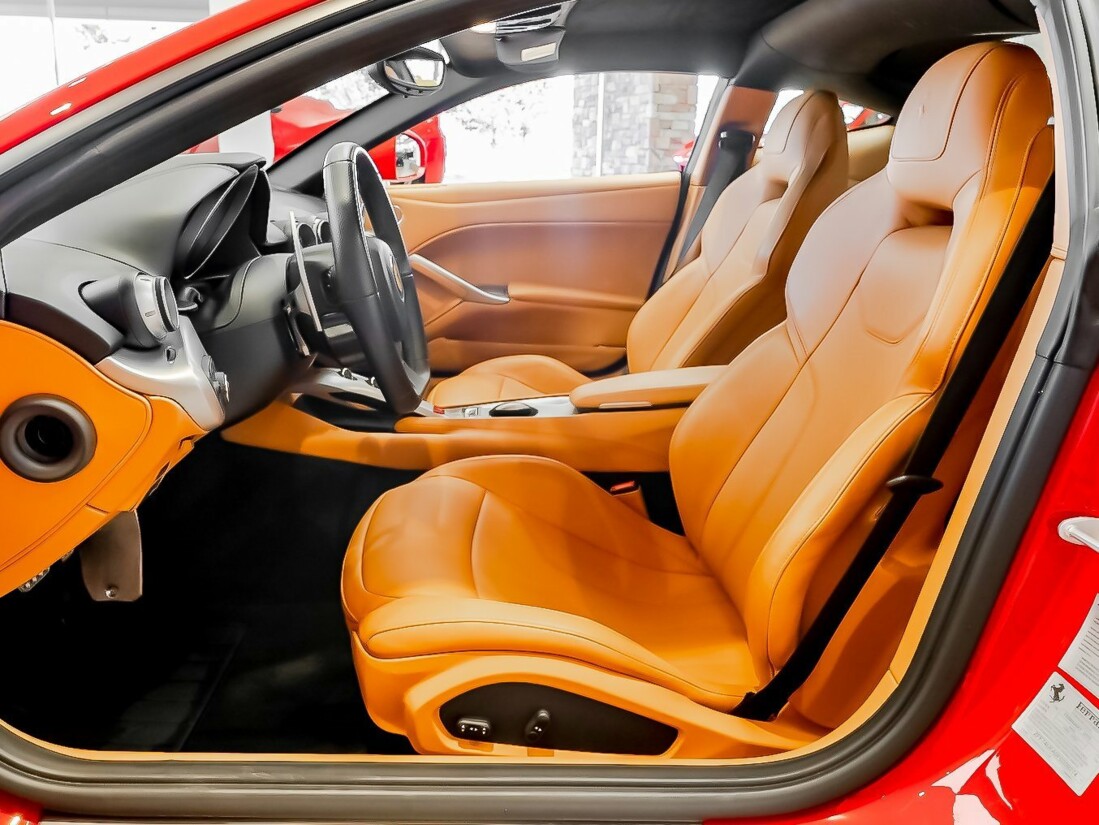