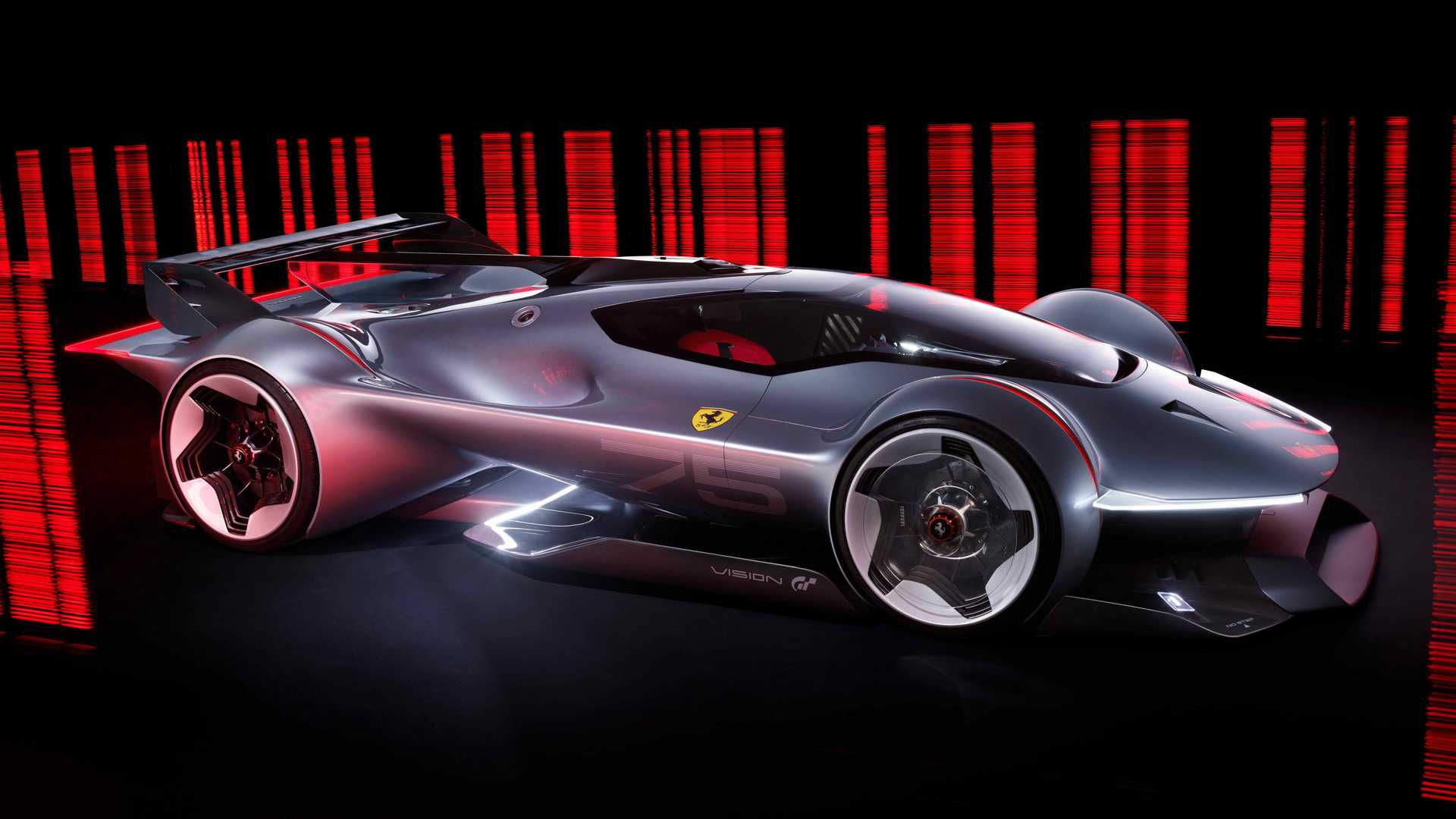 A fullsize scale model will be displayed at the Ferrari Museum in Maranello.

Ferrari is officially jumping on the Vision Gran Turismo bandwagon with its very own fictional car. The retro-futuristic styling takes after the Prancing Horse's race cars from the 1960s and 1970s, specifically the 330 P3 and 512 S. Envisioned as a single-seater machine with a closed cockpit, the VGT from Maranello has "75" graphics to signal three-quarters of a century since the brand's first race car, the 1947 125 S.

The design is not all about looking into the past for future inspiration as the rear end is derived from the recently introduced 499P, particularly the wing and diffuser. Ferrari has developed the VGT with vented wheel arches and a newly patented aerodynamic technique with two side channels routing front airflow around the cockpit and over the side pods.

Motivation is provided by the same twin-turbo 3.0-liter engine powering the 296 GTB / GTS as well as the GT3 and 499P race cars. By not having to comply with any regulations, the engineers were given complete freedom to take the 120-degree V6 to new heights. It produces a whopping 1,030 horsepower at a screaming 9,000 rpm and 900 Newton meters (664 pound-feet) of torque at 5,500 rpm.

Linked to an eight-speed, dual-clutch gearbox borrowed from Formula 1, the ICE is accompanied by three electric motors, one mounted at the back and the other two powering the front wheels. The hybrid part of the powertrain is good for another 326 hp (240 kW) in a concept that has a combined torque at the rear alone of 1,100 Nm (809 lb-ft). Despite its intricate powertrain, the Ferrari VGT is only slightly heavier than a Mazda MX-5, with a dry weight of just 1,250 kilograms (2,756 pounds) distributed 43.5 percent front / 56.5 percent rear.

Ferrari has done the math and says its Vision Gran Turismo does 0 to 62 mph (100 km/h) in under two seconds and 0 to 124 mph (200 km/h) in under five seconds. Flat out, the race car created specifically for GT7 can reach over 217 mph (350 km/h). The fabled Italian brand has even released a hypothetical lap time around its Fiorano track of under 1 minute and 10 seconds.

Introduced today during the Gran Turismo World Finals in Monte Carlo Ferrari VGT will join Gran Turismo 7 from December 23. However, the fictional race car is already featured in a viewers' campaign quiz within the game. The winner will have early access to the race car by getting the virtual keys on December 15.

That day will coincide with a public reveal of a fullsize scale model at the museum in Maranello where it'll be showcased until March 2023 alongside other Ferrari unique projects.